Images (modified): Samsung Belgium CC BY-SA 2.0 & © Tangi Tech
Developing a whole school or year-level approach to the delivery and dissemination of classes and activities via interactive whiteboards, one-to-one iPad or laptop programs or even IWB alternatives can have drastic impacts on student engagement and achievement.

Regardless of whether your school has interactive whiteboards, is looking into purchasing them, is researching alternative cost-effective methods or adopting a one-to-one iPad or laptop program, it is vital that year levels, coordinators and heads of school meet all together to extensively plan and create whole year-level technology and methodology rich Literacy and Mathematics units using their collective expertise. See the following exemplar model below for further details.
Writing and Reading @ Elmwood Junior School (West Croydon, England)

Whilst many a teacher has designed PowerPoint slides to deliver lessons via interactive whiteboards, I was blown away by the whole-school and year-level professional approach adopted at Elmwood Junior School in regards to their design and delivery of engaging and effective learning in Reading and Writing.

Regardless of the classroom or age, I found that I was able to enter into any classroom to find students engaged in clearly planned and well-thought out PowerPoint presentations that could be described by no other word than "outstanding".

After learning about the orientation of a narrative (main objective), and then commas (sub-objective), the students or teachers then read aloud the orientation of 'Bloddon's Adventure'. After reading the orientation, the staff at Elmwood had prepared the following slides to contain the same section of the story with various phrases and words highlighted. The question was then posed to students to get them to analyse and discuss as to why these phrases or words had been highlighted. Thus the students were readily able to identify and use the exemplar literary devices contained within each part of Bloddon's Adventure.

In Reading, students were engaged in learning how to answer questions using the P.E.E (Point, Evidence, Evaluation/Explanation) strategy. Using Michael Morpurgo's short story, 'The Giant's Necklace' in the book 'From Hereabout Hill', which was displayed on the IWBs via scanned pages inserted into a PowerPoint slide, teachers had inserted pop-up questions to appear after the students had read various paragraphs. Even the most modest of students were able to easily answer complicated question stems by repeating the question (point), locating and quoting evidence from the text (evidence) and then give an evaluation or explanation as to why their answer would make sense.
For example:

Year 3
In Writing, the Year Three team were employing the use of a semi-scaffolded narrative writing unit, again in the form of a PowerPoint presentation on the classroom IWB.

Entitled 'Lost', upon clicking on the title slide, the black background disappeared and a high-definition image of a forest appeared on slide one. The writing stem 'I was walking through the forest when', appeared and the students quickly copied the stem and wrote their sentence finisher with great enthusiasm.

After sharing some of their sentences, tapping on the IWB transitioned to slide two, the same high-definition image but this time with animated rain falling! The sentence stem, 'All of a sudden it started to rain and', appeared and the eyes of the students lit up. They quickly copied the stem and again finished the sentence.

After again sharing their responses, students were then given an allocated time to complete their story without the need for further sentence support.

This scaffolded approach, combined with really beautiful and detailed images, really captured the imagination of the students, leading to the creation of wonderful short stories by the students.

Having viewed the benefits for both staff and students first-hand, I returned to Australia and spent three months full-time, researching, planning, creating and sourcing a wide-variety of units for all subject areas, particularly in the areas of English and Mathematics.

This effort resulted in the development of lesson resources for every content descriptor and elaboration contained within the Australian Curriculum and AusVELS Mathematics strands and sub-strands, for Foundation to the end of Year 7 and the majority of the statements within the English curriculum, ready to run on an IWB, laptop, android tablet/phone, iPad, iPod or iPhone!

These lessons and activities could be used in whole class, small group and independent work scenarios. When used independent of the teacher (by extension students or students who were absent and were catching up with the class) the lessons and activities had many parallels to the independent learner Goodger Maths program implemented primary schools in the 1980s and the Kent Maths program implemented in secondary schools in the 1990s. 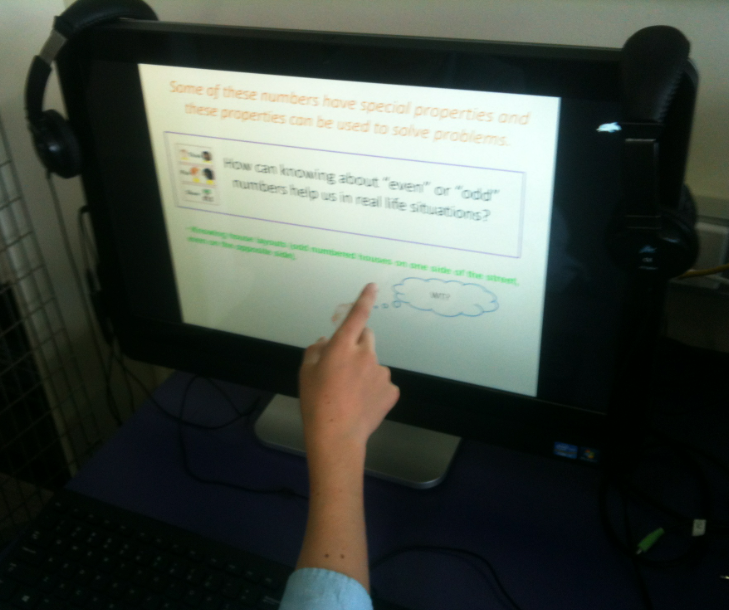 A Year Six student independently learning about the properties of numbers (odd/even, square, cubed, decimal, positive, negative, triangular, composite/prime and Fibonacci) on a touch-screen computer.
Having implemented this approach within a Year 4-6 composite classroom during the 2013 academic year (with students accessing work using the school's computers and a combination of school and student iPads, iPhones or iPods), I found that schools and/or teachers that extensively plan a whole-school or year-level approach to deliver effective curriculum via the use of PowerPoint and interactive whiteboards can also benefit in many different ways, including:


Once schools or year levels have developed their unit resources for English and Mathematics and combine them with approaches to effectively integrate ICT into the other subject areas, it becomes a simple task to create additional lesson resources for the other curriculum areas.

Explore further examples of excellence in integrating the use of ICT into various learning areas here, or via the following quick links:


Want to contribute your thoughts or suggestions about this page?