This following section contains examples of how you can use the Nintendo Wii and DS models in authentic learning scenarios (or at least in engaging ways, prior to students then applying the learned skills in more authentic situations) within your classroom! These ideas map directly to a wide variety of curricula standards (see how they may apply to the Foundation stage in Western Australia here).

Check out the many ideas for using the following games in the classroom: 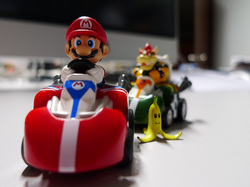 The much loved Mario Kart can be used in many teaching and learning scenarios, particularly in the subject areas of English and Mathematics.

Art / Design, Creativity & Technology and Speaking & Listening (Tuning in & Immersion)
Get the class to design and create a real Mario Kart track, with a joint start/finish line and various hazards (jumps, banana peels, question mark boxes, etc.). Each side of the boundary must be 100m in length.
Image: Wee Virapon CC BY-NC-ND 2.0


English: Writing
The mind boggles with all of the ways Mario Kart could be studied during Literacy. A few ideas includes:
© Peter Richardson 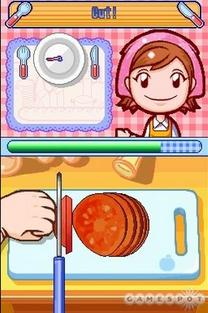 This much loved children's cooking game is perfect for use in the study of procedures and home economics. Cooking Mama, and its many various releases, requires players to prepare and cook a virtual meal from the many provided recipes, using the Wiimote's many motions for the Wii, or the touch screen on the DS/3DS.

Students must both read and listen (to the broken English with a thick Asian accent) to the various steps required to prepare and cook a recipe.

The best thing about Cooking Mama is you can even use it as a teaching and learning idea when you don't have access to a Wii or DS, as there are many videos on YouTube (see the example below).

Writing: Procedures
Ideally suited for use in the junior years classroom, a teacher or nominated student (integration children especially love this role as they are not required to write and the motions required are a fantastic opportunity to further develop their gross and fine motor skills) chooses a recipe to prepare.

The recipe/procedure can be recorded using a whole class, small group or individual approach. The class/students must write down the heading of the recipe, determine the aim, and listen & watch carefully to determine the needs/materials and the steps. Their work can be checked by sharing as a class or by comparing student work to the relevant Cooking Mama recipe listed on the Cooking Mama Wiki!

These recipes can then be trialled using real ingredients and cooking materials in class or at home for homework!

Watch the video below to see Cooking Mama in action!
Nintendo Wii - Cooking Mama World Kitchen - Sweet Potato Dish
Check out the written procedure for the sweet potato dish, along with all off the various Cooking Mama recipes, here. 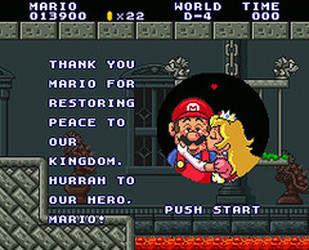 English - Reading & Viewing
Whilst travelling through Canada, I picked up a copy of the free magazine The Calgary Journal. Inside it was a wonderful article titled, 'The Virtual Feminine' (online edition, scanned copy of the original magazine edition without the image of the scantily clad woman) written by Kristine Saretsky, which analysed the roles of female protagonists in video games. The article raised an important gender issue that should be discussed with senior students.

A screenshot from Super Mario Bros.: The Lost Levels (NES) & Wii Virtual Console
With the launch of a narrative unit due to be introduced to my senior years class only a few weeks later, the article was a perfect introduction of key narrative vocabulary, particularly the term 'protagonist'. Read during Reciprocal Reading, the article was something that all members of the class could connect to, particularly the girls. In the article, Kristine discusses her memory of video games growing up as a child of the 80s and how she noticed the lack of proper female protagonists and how the damsel in distress plot device was prevalent throughout most games.
The article lead to a flurry of student discussion based around: 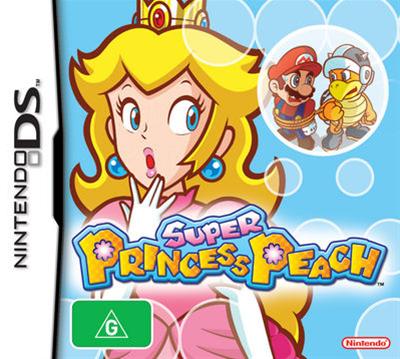 One of the first female protagonist games from Nintendo: Super Princess Peach
With the prevalence of new vocabulary (e.g. protagonist, trope, 'damsel in distress', scantily clad), the article also kept the students accountable for decoding and asking the group for assistance with comprehending the meaning of unfamiliar words.

At the end of reading the article, a few of the students asked why there was a tiny picture of Bowser kidnapping Princess Peach in a huge white gap, where clearly the picture did not belong. I mentioned that there originally was a different picture there, and that after consulting the school Principal, we decided that it would be best in a primary school setting if the picture as removed. The children looked bemused, so I then asked them what new vocabulary had they learned and which one made them giggle or feel a little uncomfortable. The students then all nodded in agreement and said, 'Scantily clad women'. As we were also learning about the human body through our Integrated Studies, we then discussed the various video games they had encountered scantily clad female or male characters and the male and female characters whose body image did not portray that of themselves and the members of their families. I then discussed that there was a picture of a scantily clad female character from a video game and that it would have been inappropriate to have the image alongside the article.

After reading the article and writing a paragraph reflecting on what they had learned whilst reading the article (including the defining of new vocabulary - e.g. protagonist, trope, 'damsel in distress', scantily clad) the students completed three follow-up activities:

Follow-Up Activity 1:
Research five modern day games where the female is the protagonist and note:
i. The game name
ii. Platform (e.g. Wii, PS3, etc.)
iii. Game type: (e.g. RPG, 1st person shooter, side-action scroller)
iv. Role of the protagonist
v. Other characters
vi. Settings and how the settings impact upon the mood of the storyline/game.

Follow-Up Activity 2:
Research five modern day games where  the male is the protagonist and who the male has to "save" (if anyone) and note:
i. The game name
ii. Platform (e.g. Wii, PS3, etc.)
iii. Game type: (e.g. RPG, 1st person shooter, side-action scroller)
iv. Role of the protagonist
v. Other characters
vi. Settings and how the settings impact upon the mood of the storyline/game.

Follow-Up Activity 3: (Which can be completed during morning admin time and eating time at recess or lunch)
Using your teacher's collection of old consoles and games (see below):
i. The game name
ii. Platform (e.g. Wii, Nintendo, Super Nintendo, Nintendo 64, Gamecube, DS, etc.)
iii. Game type: (e.g. RPG, 1st person shooter, side-action scroller)
iv. Role of the protagonist
v. Other characters
vi. Settings and how the settings impact upon the mood of the storyline/game.

The games include (to be played in this order):

The students absolutely loved this activity (especially when they realised their teacher knew the location of all of the hidden mushrooms) and completed their research work quickly so that they could then play the video games! Having read the article in small groups, a buzz was created around the classroom as soon as the students realised that only the groups who had read the article with me and then conducted the follow research, could play the games. Over the coming days, each Reciprocal Reading group read the article and completed the activities.

Use the numbered pins from the top left-hand corner of the screen. 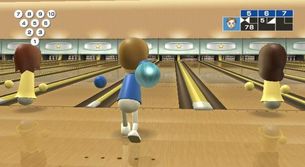 Mathematics: Making to 10 & Subtracting from 10
So much better than using the regular ten frames, any of the bowling games on the Wii are perfect for teaching junior years students how to subtract from ten and make to ten.


When bowling, students get to experience a fun and real-world situation wherein they can learn and apply basic numeracy skills. The basics of addition (counting on) and subtraction (counting back) can be taught, as long as no-one gets a strike!

WiiFit Series & Any Other Fitness Title 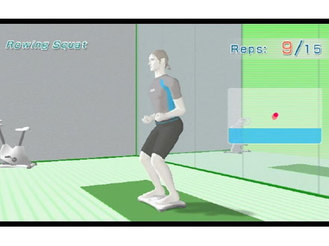 Health & P.E. - The Human Body
WiiFit and any of the other workout programs are great for teaching senior years students (in both primary and secondary schools) various health related curriculum, including exercises and related vocabulary (e.g. muscle names).

Students can learn the basics of Yoga, Pilates, as well as muscle building and flexibility exercises.
Combining work-out sessions with print outs of the relevant parts of the human body, students can highlight and name the various muscles they feel whilst working out and stretching and note down the name, number of reps or duration of each exercise/stretch. 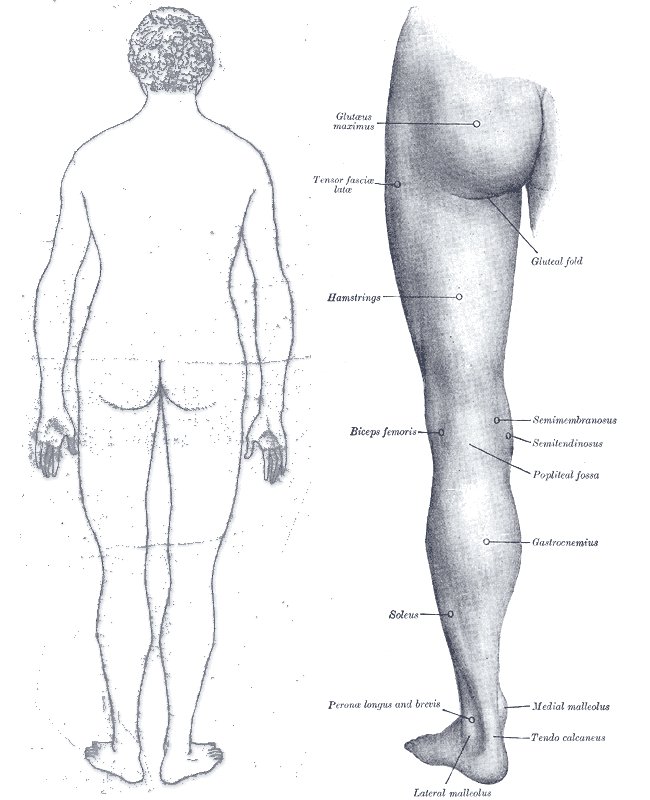 Remember the old 1980s point and click games like Police Quest and King's Quest, in a time before video games had recorded oral narration and character monologue & dialogue, where video gamers had to use their reading and typing skills to solve problems!? Or how about the game below from the Tom Hank movie 'Big'? 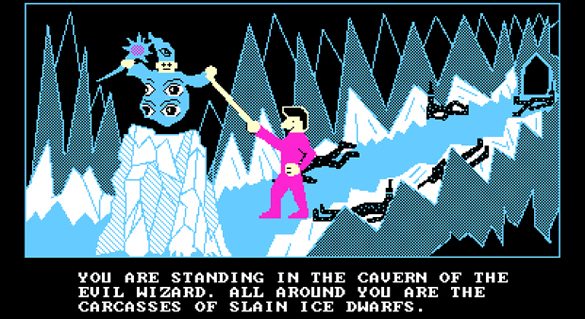 Click on the images above , below, or here to play it! 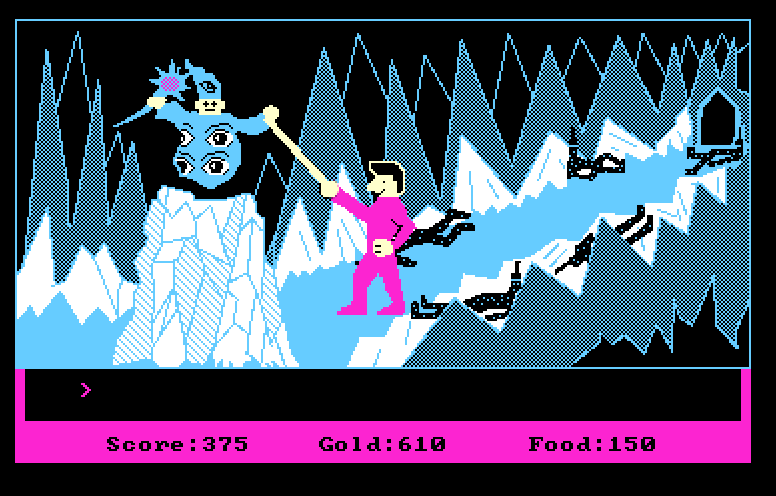 Well for owners of a modified Wii or simply those with just a PC, these games are legally still available to download and play!

Whilst the Sam and Max series has survived and is widely available on the Wii (rated PG), having recently played these titles on the Wii, the adult humour, some drug references and low-level violence do not make the series a suitable primary school classroom activity.

Check out these guides to get your students reading and typing to complete games and solve puzzles!

Emerging on the world's stage in 1983, the world's most hard to catch criminal, Carmen Sandiego, is still at large!

Click here to learn more about 'Carmen Sandiego™ Adventures in Math' for the Wii!