Alternatively, you can access the Pinterest version of this page here.
With the rapid advances in technology and the prevalence of interactive whiteboards and tablet devices in schools, schools should be implementing the use of ICT into the teaching and learning of Geography. Here are just a few ideas, including those referred to in the new Geography Australian Curriculum:
Click here to access the student portal/version of this page (opens in a new window). 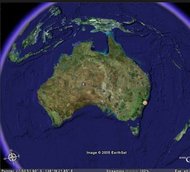 Students should be using the commercial satellite imagery within Google Earth to locate a variety of world landmarks. It is great for Geography classes as it contains hands-on vivid imagery of the world and allows students to discover various types of geographic data and zoom in and out to explore the natural and built environments of countries, states, cities, suburbs and streets.


Google Earth is particularly handy for integrated units of the built and natural environment as it also provides users access to a history of satellite imagery to see the effects of human development on the Earth. Click here to learn more.

Learn how to control Google Earth using virtual reality hand and body gestures by using Kinoogle below. To learn more about how teachers and students can use the numerous features and components of Google Earth in the classroom, download Tom Barrett's Maths Maps here and visit How To Teach With Google Earth by the Science Education Resource Center at Carleton College . 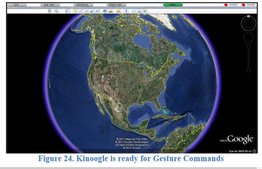 Kinoogle is a gesture and body movement interface for Google Earth and Microsoft Kinect, designed in 2011 by four university students: Bryan Blanchard, Benton Minges, Julio Montero & Cory Walker from the Department of Computer Science and Engineering at Texas A&M. 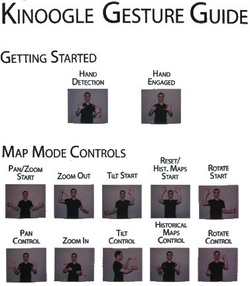 As demonstrated in the video above, Kinoogle allows users to use gestures to interact and manipulate the Google Earth map images on the screen:

WorldWide Telescope (WWT), primary built to allow students and teachers alike to harness the power of ground and space-based telescopes to explore outer space, can also be used to explore the Earth.

There are two options to use WWT:
Visit WorldWide Telescope Ambassadors to access video and text-based tutorials to learn how to use WWT and download lesson ideas on how to use WWT in the classroom. Click here to learn more. 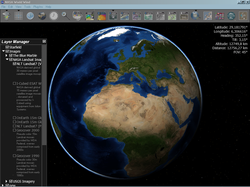 NASA Worldwind is an open-source virtual globe created by NASA that runs on Java. Unlike Google Earth, Worldwind is not one application but many, created by various government and commercial developers around the world. Worldwind also also great for exploring the solar systems as it includes several worlds: Moon, Mars, Venus, Jupiter and various stars & galaxies.


The open-source code of Worldwind has also been used to create 'The Layered Earth', an interactive resource to learn the Earth science and geography curriculum for upper primary and secondary school settings.


To use NASA Worldwind Java: 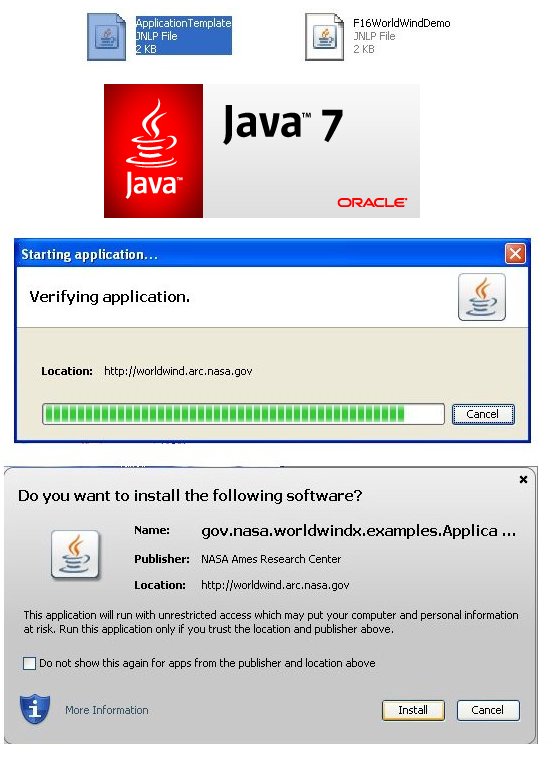 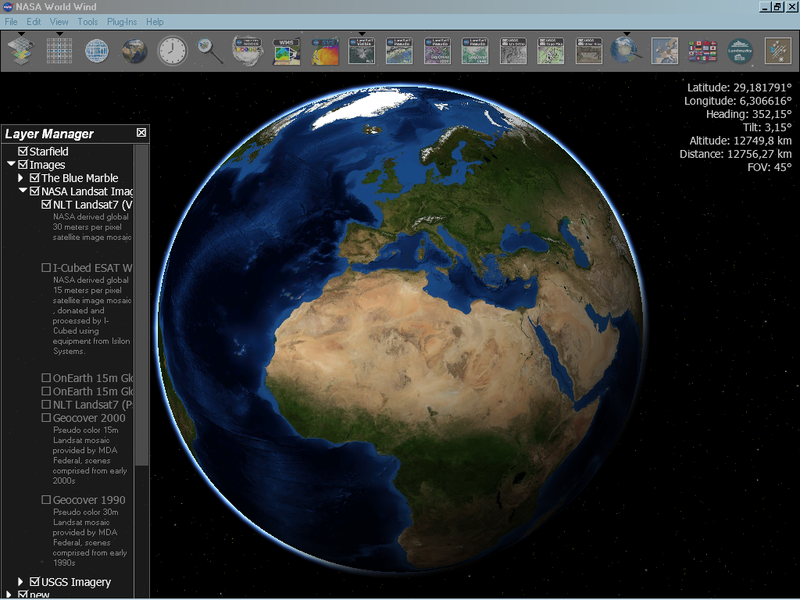 The imagery of Earth and the subsequent research contained on the European Space Agency's website is referred to in the Australian Geography curriculum. 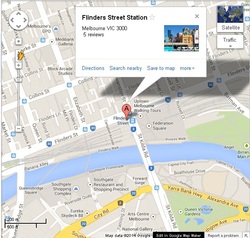 Students should be using Google Maps on a variety of platforms to:

Alternative online maps such as Apple Maps  (use the 'Flyover' feature), Street Directory and Whereis (see below) should also be used to compare a variety of approaches to locate the same landmark.

Google has released Smarty Pins, a geographical trivia game that requires combining your general knowledge with the ability to use Google Maps to pin the location/answer.

It is available for free online, as well as an app for Android and iOS. 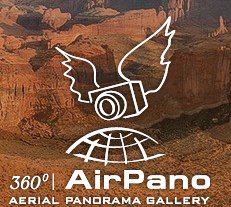 AirPano takes users on a 3D, 360 degree aerial panoramic tours of various sites and landmarks around the world via interactives and videos.

It is a not-for-profit project created by a team of Russian photo enthusiasts focused on taking high-resolution aerial panoramic photographs from helicopters, aeroplanes, dirigibles, hot air balloons, and radio-controlled helicopters.

Where in the World is Carmen Sandiego

Emerging on the world's stage in 1983, the world's most hard to catch criminal, Carmen Sandiego, is still at large!

Visit this website to download and play various free and paid versions of 'Where in the World is Carmen Sandiego?' for Windows and Mac or click here for 'Carmen Sandiego™ Adventures in Math' for the Wii!

In one of her blog posts, Silvia Tosilano talks about schools using Skype and an IWB/projector (which can of course be extended to include using Facetime via displaying an iPad's screen onto a PC using AirServer or AppleTV) to set up a live video call with a person living in another country known to a staff member.

Using clues given to them by the 'mystery caller' (e.g. weather, landmarks, etc.), students work in groups to determine the geographical location of the person.

Some of the roles include:

To learn more about the details, visit Silvia Tosilano's posts on her blog 'Langwitches' about this activity here and here (ensure that you watch the video of students discussing what they learned). 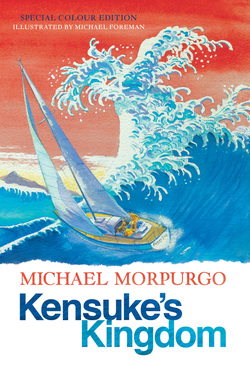 Useful in the middle-upper years primary school classroom, class novels that see the characters travel throughout the world are particularly useful in teaching children about the wider-world around them.

Books like Michael Morpurgo's Kensuke's Kingdom (pictured left) engage students in exploring exotic destinations around the globe. Every time a new location is discussed or visited in the text, students can use Google Earth & Maps, a class globe and a giant map of the world placed up in a classroom to plot the journey/route taken by the character(s). Download a weekly/chapter Geography activity for Kensuke's Kingdom here.

Further internet research can take place in determining where the characters might go next or to learn more details about each location. 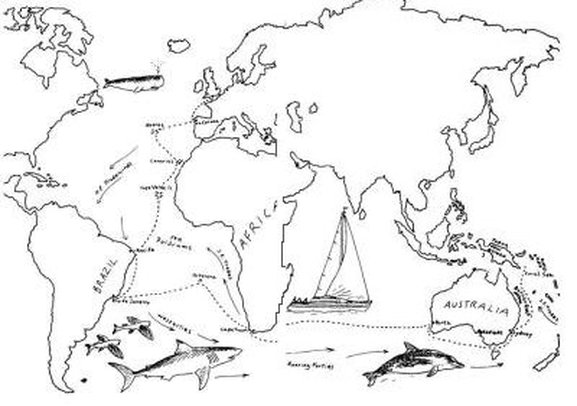 Michael's journey in Kensuke's Kingdom
Whilst it does not matter whether students read a hard copy or eBook version of such a story, the nature of reading an eBook on a internet enabled device allows students to quickly switch between the eBook window and an internet browser to quickly learn more about each location.

Teddy Bears Around The World

Teddy Bears Around The World is a junior years blogging project, created by Silvia Rosenthal Tosilano, that originally started in one classroom and then spread into many schools and classrooms worldwide. It is a valuable resource that allows students to see each other’s countries, customs and traditions through the eyes of the teddy bears and open their horizons through a more global perspective.

Simply contact Teddy Bears Around The World with information about your school and teddy bear and to receive a username to participate on the blog.

This app for iOS and Android was one of the first apps to offer spoken turn-by-turn instructions, making it perfect for use during both Mathematics and Speaking & Listening lessons. Download it today and go for a walk around your school neighbourhood being guided by some famous Australian celebrities! Watch the video below to learn more!

Whereis has launched a cute animated 3D app for iOS devices, perfect for use in both the junior and senior years classroom.

Although it is in a Beta stage, its such a fun and friendly app to use with children as they can see animated trams running down Swanston Street, a plane flying over head or even traffic moving in the streets! Watch the video below.

SpatialGenie (created by by Education Services Australia) allows users to explore Australian geographical data overlayed on a map of Australia, such as animal population areas, vegetation, and occurrences of bushfires and earthquakes, as well as historical maps. 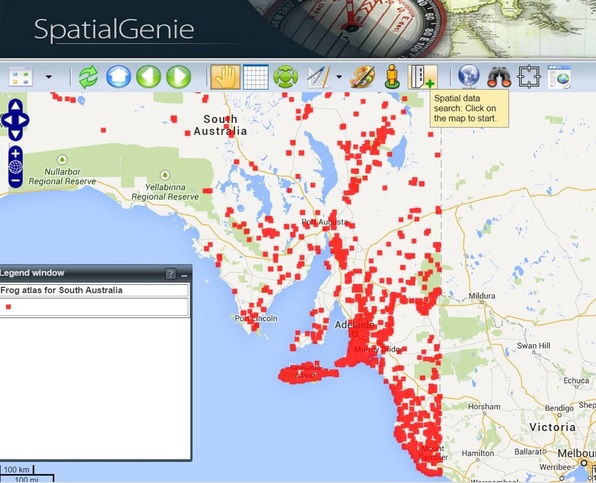 StatPlanet allows users to creative interactive maps (the free versions only contains maps of the World and USA). 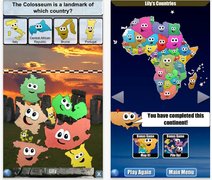 Stack the Countries is a cute game for iOS devices that teaches children the layout of the world map, the shapes of countries, where they fit within the world and relevant facts about each country.

Whilst stacking the countries may seem more like a weird offshoot of Tetris, it is a great app to develop world geographical knowledge in young children. Watch the video below to see Stack the Countries in action.

Tagxedo is an online free service that allows users to create worded graphics formatted into a given shape or object (much like a Wordle but a Wordle does not allow users to "shape" the display).

Tagxedo can be particularly useful in the study of Geography as it allows students to create rich displays of vocabulary related to any particular area of geographical studies and display the vocabulary in the form of a related map of a country or globe. Simply follow the steps below to create a Tagxedo cloud. 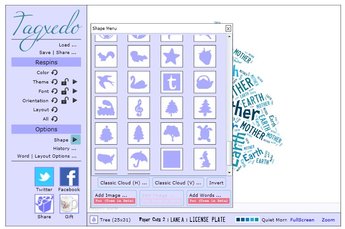 1. Tagxedo is powered by Microsoft Silverlight, so ensure that Silverlight is installed on the computer.

3, Under the 'Options Menu' click on the arrow next to the word 'Shape' to (i) select from a variety of given shape layouts or (ii) to browse the computer for an object/shape by clicking on 'Add Image'.

4. At the top of the Tagxedo window click 'Load...' to type or paste in the desired vocabulary.

5. Save the word cloud by clicking 'Save | Share ...' and selecting the desired option.

Scary but useful at the same time, iPhones record a history of location data of where an iPhone has connected to a data point. This can be useful for users to show the geographical travels of an iPhone in either local, state, country or global contexts. See the two programs below for more details on how this data could be used responsibly in an educational setting. 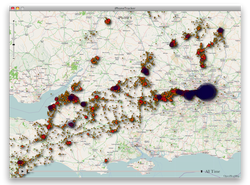 iPhoneTracker is an open-source program developed by Pete Warden that can be used to access an iPhone's memory and create a map to display the location history of where an iPhone has connected to a data point.

It can be used responsibly in a classroom setting to show the geographical travels of a teacher in either local, state, country or global contexts. 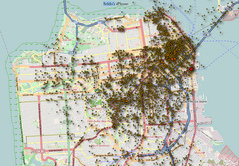 Note: An iPhone is frequently wrong about where owners are, by up to half a mile or so. So data points will show on average about where the iPhone was, but there will be plenty of random outliers
However, for those who are stressing upon reading this section, for security purposes, Apple have ensured that (i) once a user has downloaded and installed an iOS software update that the historical data will be erased and (ii) the data location history file is now also encrypted so it can no longer be accessed if users turn on 'Encrypt  iPhone Backup' . 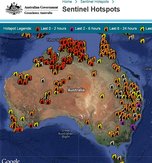 Sentinel (created by the Australian Government Geoscience Division) is a national bushfire monitoring system that provides timely information about hotspots to emergency service managers across Australia.

The mapping system allows users to identify fire locations with a potential risk to communities and property.

GeogSpace is an initiative of the Australian Geography Teachers Association (AGTA) designed to provide materials to support primary and secondary teachers in implementing the Australian Curriculum: Geography. It has been developed by AGTA's team of practising geography teachers.

Whilst there are some good resources and possible teaching and learning opportunities discussed, unfortunately the website can be rather difficult to follow as it is rather wordy, reads like a thesis, lacks images and appears to contain broken links.

The emergence of large touchscreen surfaces are having an impact on the study of geography and science.

One such application is the Urban Explorer project, where touchscreen technology is combined with the world highest quality 3D maps and live data sources to assist in town planning and the communication of data on sustainability to residents.

Watch the video below to learn more and then brainstorm with your students ideas as to how they propose that touchscreens could be used to replace the traditional mouse and keyboard as input and interactive devices.